Hope this Mufti-Modi meet turns out to be positive and does not end in the proverbial endings! 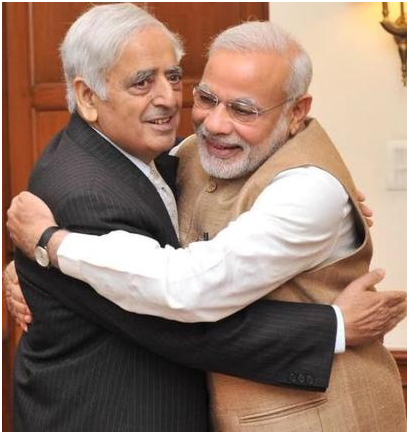 At long last after a wait of more than a couple of months, J & K has an elected government. According to Mufti Muhammad Sayyed it is the meeting of the North Pole and the South Pole. Hopefully it does not turn into an equatorial meeting which would be too hot and uncomfortable! A picture of Narendra Modi hugging Mufti Sayed was splashed all over the media just before the swearing in of the new PDP-BJP government in J&K. It represented something like a Bear Hug! Both the parties are attaching great importance to a first historical alliance between the two regions of the state. There are a lot of expectations both developmental and political. The moot point is whether the hug is really a positive bear hug and a lasting one and does not turn into the proverbial bear hug? Both leaders took a pretty long time in preparing to hug each other. If one minutely observes the facial expression of the two leaders, it appears that Mufti Sayyed was not very comfortable in hugging Modi who on the contrary seems happy and contented. While as Modi is holding him tightly in terms of a true bear hug, Mufti Sayed’s hands are open! There have been many opinions and comments about this ideologically incompatible alliance. On the positive side, it is said that this is for the first time that the two regions have come together to fulfil their aspirations notwithstanding the fact that some of the aspirations are diametrically opposite. It has been claimed to be respecting the mandate of the people of two regions. Others have opined that a strong and stable state government backed by equally strong and stable central government can do developmental wonders. Well, that may be true if both have the sincerity of purpose and honestly implement their mandates. On the negative side, it has been alleged that both the sides have receded from their main agendas simply to capture power at all costs. For BJP it was an excellent opportunity after the Delhi debacle to show some positive gain. Kashmiris have been extremely alienated and this was an excellent opportunity for the ghar wapsi of the estranged people even though not in terms of the declared long term agenda of the RSS. For PDP the realisation of its long term agenda of self-rule seemed a tall utopian order and the least they could show as an achievement was going in a big way on the developmental agenda including relief and rehabilitation of the flood affected. The common people, who have been suffering during Omar Abdullah’s comatose administration, expect relief and rehabilitation on a war footing. Everything in Kashmir from electric power to roads and above all the environment is in shambles. The most immediate task is prevention of future floods which has so far been totally neglected resulting in some fresh breaches and water-logging of the city. Another nightmare which has visited Kashmir recently is the swine flu! It has created worse scare than the unprecedented flood. Both sides have agreed to put the controversial issues on the back burner. Well, that will not be difficult for the ruling set ups to do if they have the honesty and the sincerity of purpose. It is not difficult to control the state machinery if the rulers really want to do it. After all they are constitutionally supposed to control the state actors. However, the main headache would be controlling the non-state actors who will have prompting from a number of sides. This too can be done if the two sides are sincere and do not score points over each other. To ensure honest implementation of all these measures and give succour to the troubled and suffering people, they have to first of all tackle corruption head on without any fear or favour. Honesty like water flows from top to down below. If the top is honest, the people below will too have to become honest. If the top is corrupt, the honest people below cannot survive. One can forget the movement forward on the ultimate solution to the political problem in Kashmir. It too has gone to the back burner. People having expectations of the final solution from the mainstream parties are being hypocritical. Their maximum contribution is lessening the harassment on the ground and improving the day to day living conditions. On this count one would have to watch the performance. It will not be fair to pass the judgement regarding the governance and stability of the set up at the moment. However, they need to understand that there are many pitfalls and they would be doing a tight-rope walk. The swords of Damocles would be always hanging over their heads. Mufti Sayed who affectionately hugged Narendra Modi needs only to be reminded about the Kashmiri proverbs, “Kakun Haaputh” and “Haapath Yarazz” which for him needs no explanation!
Posted by Kashmir First at 8:26 PM No comments: